His latest and most prized project to date "Ouantum Collage" includes classical music & old jazz hits all reworked with a new beat...

Ohm G´s music has featured in many of the Café del Mar albums. He wrote and recorded the official remix of the Blade Runner soundtrack: Love Theme (by Vangelis) – which was released under his surname, Gutbrod. Ohm-G – as Atzaro´s resident DJ for eight years – created the renowned Atzaró Lounge. The fruits of his labours are imprinted across Atzaró’s Soundscapes, volumes 1, 2, 3 and 4; compiled and mixed by his truly.

Ohm-G was born and bred in Tübingen, Germany, in 1961. As a child born into the “love and peace generation”, he remembers observing people’s corporate existences with cautious skepticism: “All I saw were busy people with lots of money, but no precious time to actually enjoy their wealth. It made no sense to me. From an early age, I knew I had to strive to find something more.”

As a result, Ohm-G broadened his horizons to a far more intuitive and sentient existence from day one – namely one encompassing music, in all its many forms. From as far back as he can remember, music has played a pivotal role in his life, guiding all he does. His two older sisters, along with the household radio, saw to it that Jimmy Hendrix and The Beatles had a massive influence on Ohm-G from the offset. Later, Italian radio hits would strike a powerful musical chord with him.

By 19, Ohm-G was already thoroughly on his way to pursuing a lifelong music career. From the early 80s, he could be found playing guitar and keyboards for a punk jazz band, Gutbrod Attack, and setting up his first studio, Red Light Studio, in Munich where he lived. He started experimenting with sounds; a passion which was to grow and grow, and soon surpass his enjoyment of playing live. Within no time at all he was being commissioned to compose soundtracks for film, documentary and theatre. Publishing deals with countless major labels, including Warner/Chappell and BMG, cemented an illustrious career in chill-out, ambient and experimental music. Loving the independence that came with producing his and other’s music, his musical course was irreversibly set.

During this time he also wrote with the Belgian music act, Vaya Con Dios.

It was in early 2000, that he started to generate his own work, kicking off with a sample CD, Spiritual Voices; incorporating tribal voices he’d recorded during extensive travels across Africa and India. In 2001, Jubilee Recordings put out his first album, Future Ballads, on worldwide release. Many tracks from this album quickly found their way onto major compilation collections including Café del Mar, Hôtel Costes, and many more. And so began Ohm-G’s inevitable bond with Ibiza. It had started with spending millennium NYE celebrations here, and soon led on to an enduring friendship and collaboration with the resident DJ and album compiler of the Café del Mar volumes, Bruno. Ohm-G’s music has featured across many of the Café del Mar albums since.

In 2002, he moved to Ibiza permanently; setting up home and a studio in the campo of San Miguel. His second album, Pop-Art, was released in the same year. Soon after, Ohm-G was approached to do an official remix of the Blade Runner soundtrack: Love Theme (by Vangelis) – which was released under his surname, Gutbrod. 2005 saw the release of his third album, Moments. Months later, Bruno’s first album, Puzzle, was released; all tracks credited as being written and produced by Ohm-G and Bruno.

Again, many of these tracks are scattered across mainstream compilation CDs, including Hôtel Costes.

In 2007, Ohm-G made a seamless switch from chill-out to dance music. Life outside of the studio was proving busy too. Quite apart from DJing at countless exclusive private parties, Ohm-G – as their resident DJ for eight years – created the renowned Atzaró Lounge. The fruits of his labours are imprinted across Atzaró’s Soundscapes, volumes 1, 2, 3 and 4; compiled and mixed by his truly. In 2010, he and Stephen Russell (aka the Barefoot Doctor) produced a Dance Meditation album together, Green Rabbit, which was released on Ohm-G’s own label, EIVISSABEAT. His latest album, Hulectric Soul, was released on the same label in 2011, and The Best of Ohm-G on Mole Listening Pearls in 2012.

Last year, Ohm-G turned his focus back to live performance, launching Night of Lights at Atzaró. This audiovisual show reportedly effortlessly fused Eastern style music performed live by Bahramji, light projections courtesy of Bamboo, and a delicately designed backing track provided by Ohm-G. He assures me that this skillful trio has much more of the same in the pipeline.

Despite his considerable achievements to date, meeting Ohm-G in person leaves, above all, a lasting impression of his overriding spiritual philosophy on life: “Music is inspired on a mystical level. None of this is about me, I am merely a servant. All I do is about connecting with something that is not within. The greatest principle I live by, is that the way is the goal. To me, success is about retaining the innocence of life, and listening from the heart, not ego.”

This year, life has guided him to continue his weekly DJing activities at ‘Elements’ on Benirràs beach on Fridays, from 7pm. He will also be on tour with Bahramji; performing live and DJing with a bespoke B12 The Gallery event entitled: Art and Fashion, Champagne and Caviar XXL. This sumptuously creative party crew will be hitting many of the island’s hotspots, including Ushuaia and El Hotel Pacha, throughout the summer.

Meanwhile, he’ll no doubt be masterfully working up many more audiovisual feasts across the island, and focusing on his latest and most prized studio project to date: Back to the Future. Watch this space for his house remixes of Jimi Hendrix, The Cure, Prince, Soft Cell, David Bowie, and The Rolling Stones, to name but a few… “I already have 20 on the go!” he informs me with an irrepressible glint in his eye. Something tells me that these timely musical offerings – paying tribute to his earliest influences in music, but duly touched with a modern twist of all he has learned along the way – will be echoing triumphantly across the island very soon… • 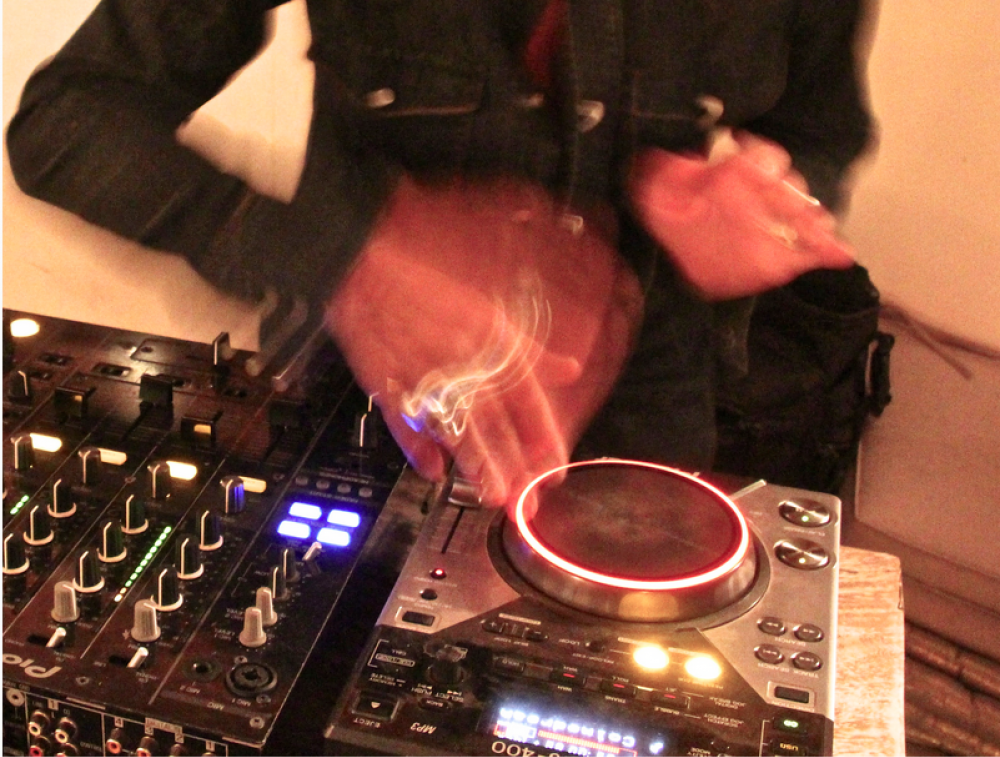 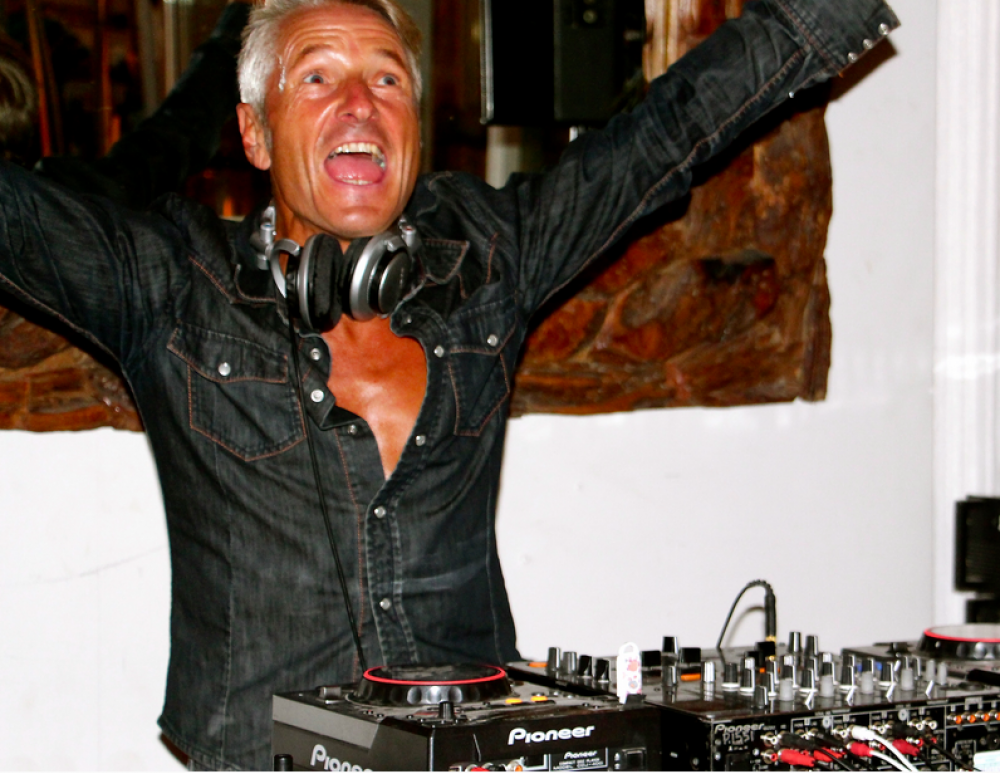 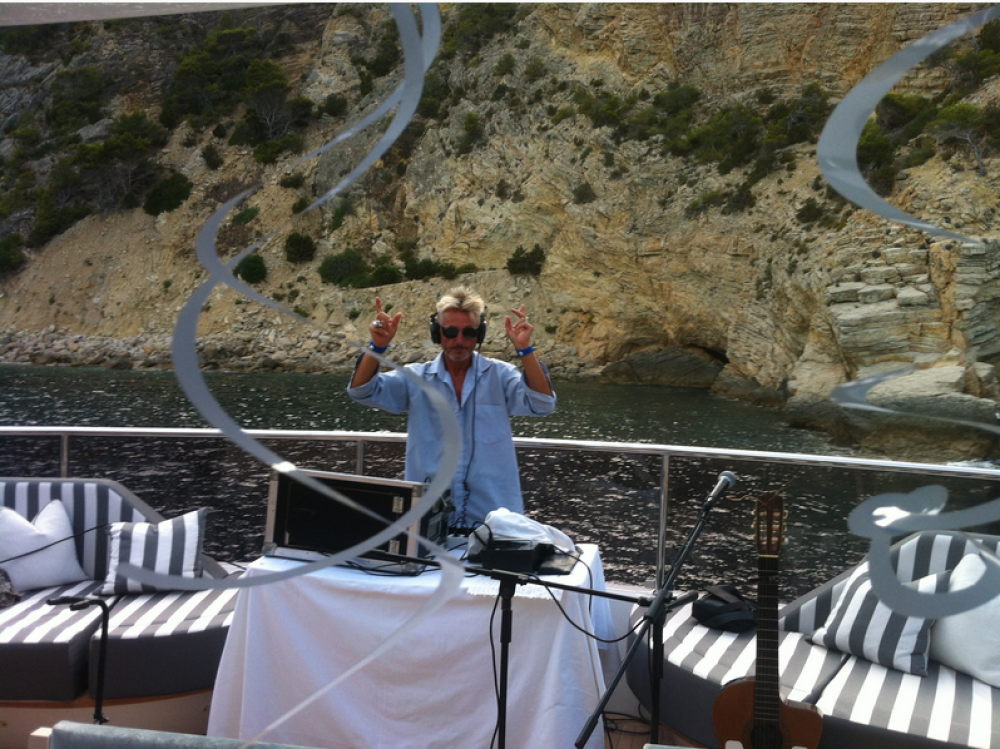 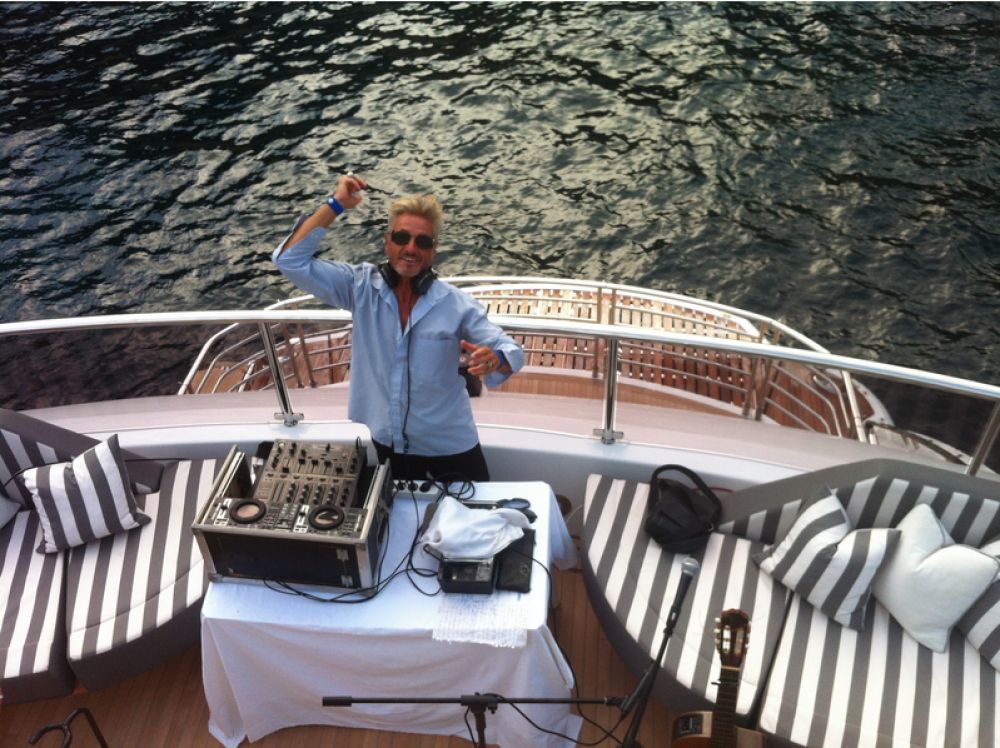